MyoType and my first hackathon

I was always a bit resistant to Hackathons. Maybe I should never have watched The Social Network or contacted the staff of Paris Coders Night. But yes, I had this idea it wan’t a place for me. Collaboration is good. Competition sounds scary and hostile. I love programming, though. I have my own lovely projects and when I came in an exchange scholarship program to France, I decided I’d try to go to one tech event per month, since Europe is more eventful than Brazil on the tech scene, it seems.

Recently, a colleague at former university PUC-Rio, Guilherme Berger, who is in exchange in the United States, added me to the Hackathon Hackers and The Ladies Storm Hackathons groups on Facebook. I realized people were actually discussing very interesting things and promptly started searching and trying to get into every HH group I found. Then I saw there was one for Europe.

When I was accepted, I made a post introduing myself and telling a bit of my journey, my insecurities and my resistance to Hackathons. Then, something magical happened: people were being so nice on the internet. I got this lovely feedback with articles about being new on hackathons, got tech career advices, and was asked if I was going to HackLondon. They were so nice I had to say yes, specially after I heard I could apply to partial travel reimbursements (Jessica and Joe, if you are reading this, you are awesome). So I got into the waiting list, bought the tickets to travel and started searching a place to stay on friday night. Now listen how these people are nice: they even found me a couch for friday night (Josh, also awesome). 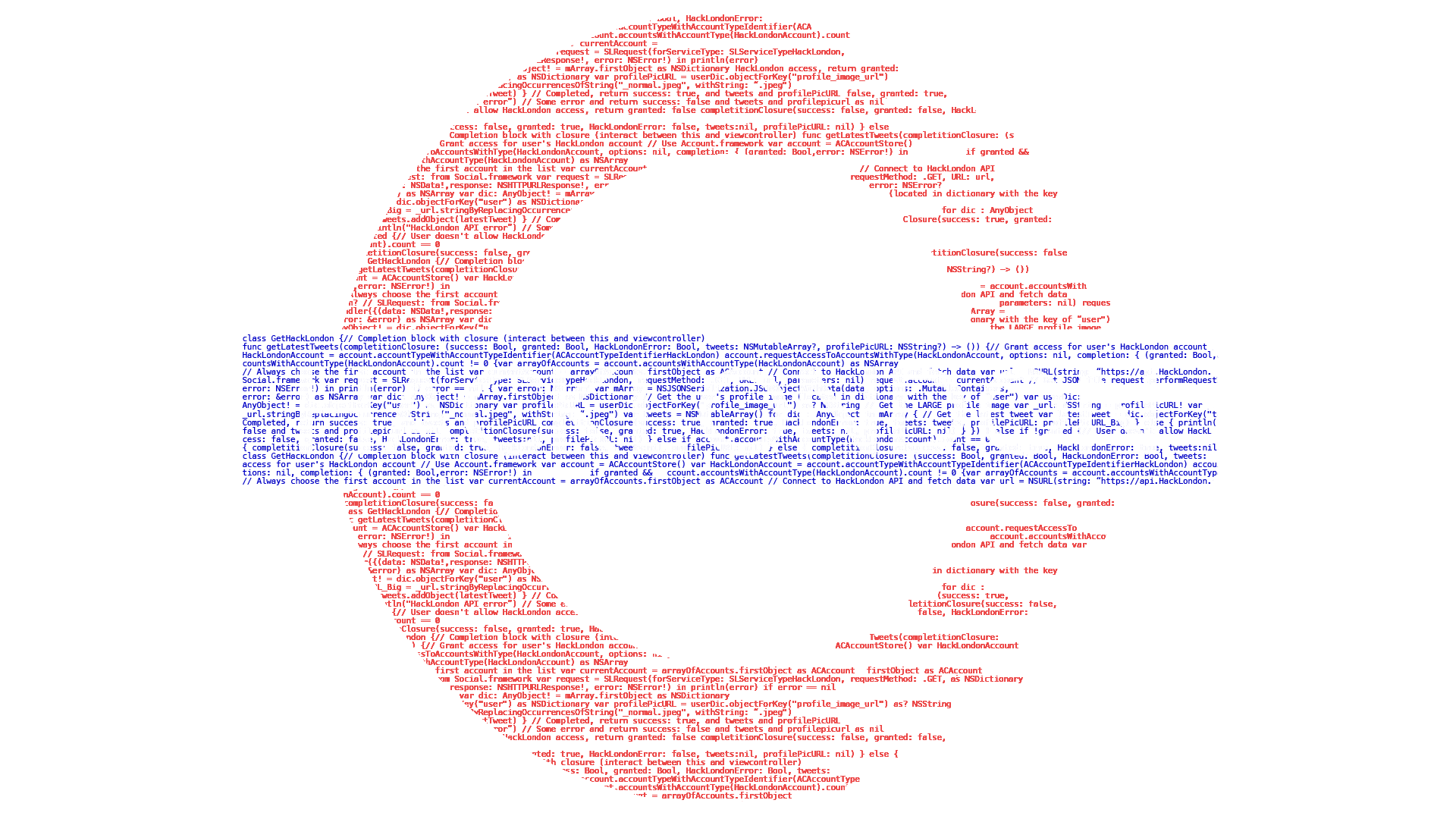 Hacklondon begins: I’m kinda lost. I had this idea that all Hackathons were around a theme, so it was useless to think of possible hacks before I got there. I was wrong and started panicking a little bit. We could choose anything and I had absolutely no idea what to do.

I found my team by chance. There was this meeting right after the opening ceremony with everyone that had an idea but not a team, a team but no idea or nothing at all. I found out these wonderful guys and we started wondering about ideas. Ian wanted to do something hardware related and I was pretty resistant to that. I really wanted to do something social. Other ideas were to do something food related because the just-eat sponsor prize was pretty cool. At some point we actually passed through some kind of food tinder idea. We didn’t get to a consensus so we split up a little bit, taking a look at the sponsor’s APIs and other tools the event offered. After getting the Bloomberg API to work I started seeing some cool data about women and career, the rest of the team liked that but they pointed something interesting out: So we get the data and then what? We just show it? While the data is really important I don’t think this makes a cool hack (It could be an awesome blog post in the future!). So we got back to square one. I spent hours thinking we sucked (no we don’t and MyoType is the best team ever! I just didn’t know then). Csongor was playing with the Myo that Ian brought in borrowed from MLH equipment. By dinner time I was still not satisfied, part of the team was walking around, part of the team was stressed, but also part of the team was being so supportive.

Then, during dinner, it hit me. I had this idea, what if we used Myo to type? It could help people that struggle with typing on tiny keyboards. I told the idea to the guys, they seemed to like it and I was so happy! I got this wave of excitement thinking I was some kind of genius. I was so deeply satisfied that I went back to my laptop running. Now, thinking it over, it was the first thing Ian said, plus the first thing I wanted, combined. Something with hardware, something social. And the typing idea did not come from nowhere either. I mean, at the time it seemed like it did. But then I realized I’ve actually been keeping tiny bits of information about this subject without noticing. And I tried to trace it back every time I interacted with something related to MyoType.

Here are some references that were helpful for me to build this project: Just few days ago I saw the Theory of Everything, which showed me in a very emotional way a little about the struggle that Stephen Hawking went through to communicate. Just few weeks ago I saw Gleison Fernandes, a Brazilian computer scientist, in the news. He has cerebral palsy and he invented this interactive keyboard with big buttons to facilite the life of others like him on typing. It was so expensive he gave up patenting to make it more available to people. I remember being so impressed both with his invention. My friends told me, a couple of years ago, about the Steam Big Picture, for chatting on Steam while using a game controller. And I remember thinking it was so cool. And, finally, the oldest thing I could recall, the saddest movie I’ve seen in my whole life, Le Scaphandre et le Papillon. It’s a film that tells the story of Jean-Dominique Bauby, a french journalist that acquired the Locked-in syndrome due to a stroke and wrote a whole book by blinking. 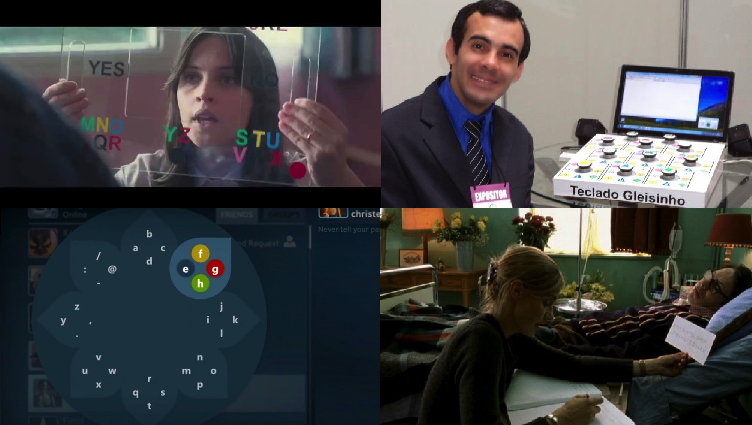 This taught me a valuable lesson: Ideas don’t come from nowhere. Just sitting and thinking hard won’t do it. We need to be open and we need to be in contact with information related to the stuff we are interested. Not in a 5 minutes google search. All the time. And it will be even easier if it’s something that gets to you. Something that touches you. And then at some point, all that information comes together and something “clicks”.

So we started developing MyoType. From this point on, my memory is a blur! I just remember being so tired and alert at the same time. Me and Jakub started testing the first keystrokes using Myo. After getting a small prototype done, I took a nap. The guys kept working on the design and a duckduckgo integration. We started bug hunting, adding a backspace feature, I tried improving the flow of the scroll and suddenly everything was fine! Now it was the time for submitting and preparing our pitch (Sorry for panicking, guys <3). The tools we used overall were: Myo , a bracelet for controlling gestures; Lua Programming Language, the awesome language used in Myo’s API; Javascript, to scroll the characters on the website; HTML and CSS for the website’s design; Duckduckgo, to redirect the input text to a search engine; And git + github, to work together and share our work. 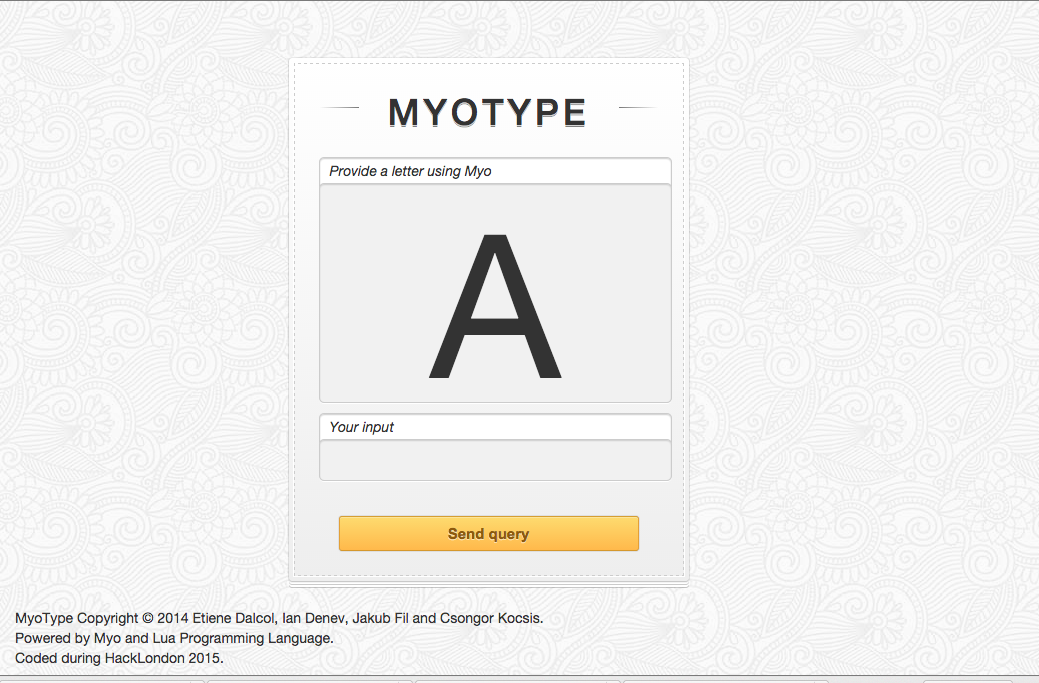 I’m very happy with what we achieved during this Hackathon. I’m not sure if MyoType itself would have any real impact, but it’s a very cool prototype, it taught me so much, and nothing stops the continuation of this idea later on. It’s so inspiring and I’d like very much too see more hacks like that. I’ve been reading articles that reinforce that hackathons are not about prizes and I’d to think that in pretty much the same way it’s not about making a new multibillionaire social network app. Hacks don’t need to be enormous and profitable. They need to be inspiring and useful, specially if the utility is making you learn something new.

When MyoType was announced to be in the 10 finalists I started shaking. So much I couldn’t even hold my laptop on my lap. Then Fares tells his story about coming to the UK and feeling different and all. And it’s so relatable to me because I’m going through similar stuff in France right now. So I started crying! I mean, holy crap, the feels! I really have no idea how I didn’t just freak out when MyoType was chosen as Best User Input hack. Specially with all the twitter love we were getting. If you want to see how MyoType works, check the video below:

I'd like to take a moment to thank again everyone who made this possible: Jessica Crossby, Josh Tigger-Simpson, Joe Nash, Fares Alaboud, and all the rest of HackLondon's and MLH's staff; the rest of MyoType's team Ian Denev, Jakub Fil and Csongor Kocsis; and my mom, whom I miss so much and is back in Brazil exagerating my acomplishments to the neighbours. 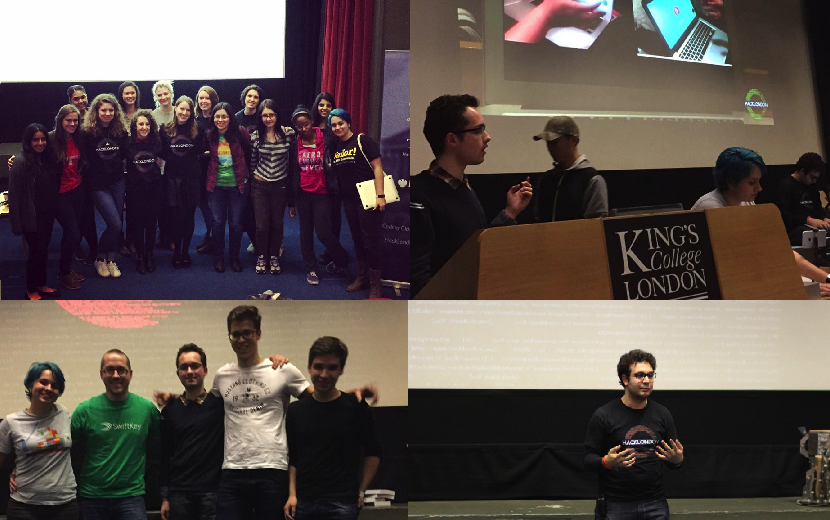